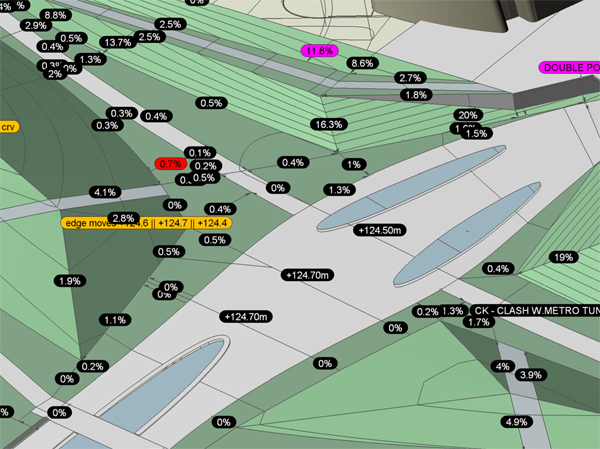 Working for landscape architects Gustafson Porter + Bowman for 3 years has given me a strong understanding of digital modelling processes for landscape design. During my time with them, I produced several high-fidelity 3D existing and proposed topographical models for a range of projects across urban locations:

· CityLife Milan, Italy. Stages: competition proposal, which we won. Phase 1 of the project was built in 2014.

These models have to incorporate a variety of detail: all soft and hard landscape surface features, contours, breaklines, roads & paths, natural & artificial zones of water, and so on.

As a result these models must be very precise in areas (for example when we must achieve a specific path slope or set a drainage point), while other areas are less clearly defined and instead must be ‘intuitively’ regraded and moulded to smoothly transition between the fixed datums and levels.

Modelling these landscapes therefore requires a strong understanding of topography and high-end surface modelling techniques – such as tangential surfacing and curvature analysis. These techniques are more often seen in disciplines such as product design, where it can be vital to achieve tangency and surface continuity.

To aid this process I developed a set of landscape-specific scripts and parametric tools that can generate and analyse a range of features such as slope ratio, Isopach, contour, TIN spacing, and so on.