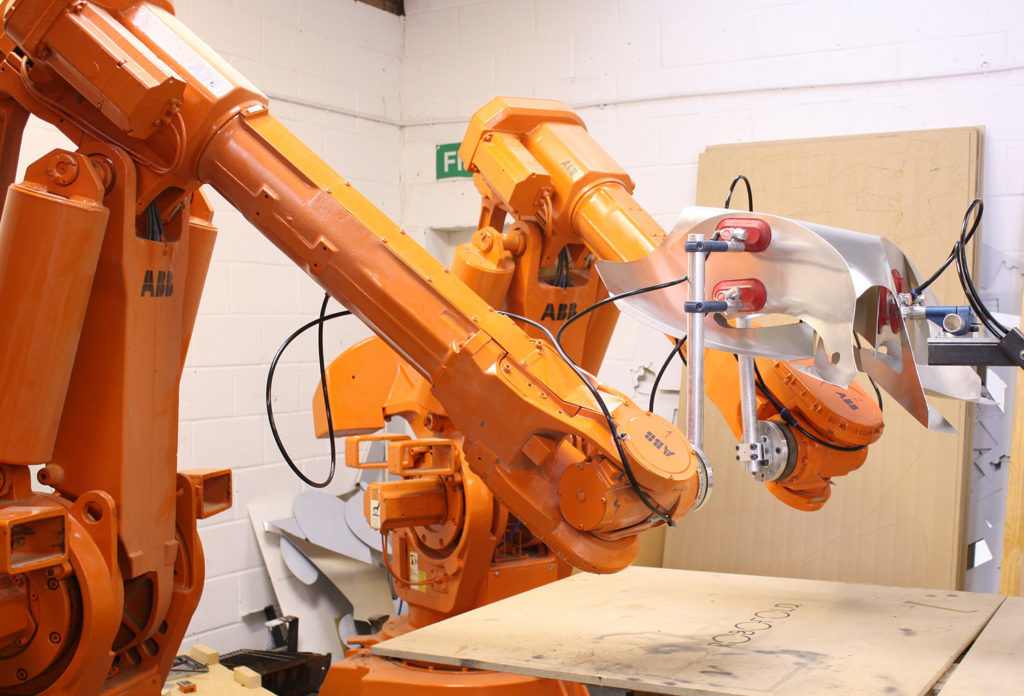 Between 2011 and 2014, I collaborated with RoboFold, a robotic fabrication company based in London.

We developed parametric processes to control and calibrate their two in-house 6-axis ABB robots simultaneously. We programmed the robots to form ‘curved folds’ in sheet materials, a technique that has applications in furniture & product design, sculpture and architecture. As a result we collaborated on curved folding projects with architects, engineers, facade designers and artists.

Periodic workshops with students, such as Shape to Fabrication 2011, enabled us to share the processes at the same time as refining our robotic digital interfaces.

The methodology we teach in the student workshops gives a good overview of the entire ‘RoboFold’ process:

The design process is a very intuitive one, combining both hands-on experimentation and digital simulation & fabrication.

We begin by building lots of rough card models by hand, just to get a feel for how the card behaves physically and in order to generate lots of varied possible forms. These can be made by sketching on card sheets and folding along the ridge lines created, or just by running a blunt scalpel ‘freehand’ across the card, and seeing how the resulting form folds (or doesn’t!). These experiments quickly reveal the few underlying ‘rules’ to curved folds in sheets material – such as if you have two concave folds next to one another, one must be a ‘mountain’ fold and one must be a ‘valley’ fold, and so on. All of these rules are in reality just a result of the material remaining developable throughout the fold process – so while the entire sheet might appear to have a very complex form, all the individual sections that comprise it are either cylindrical, conic, tangent developable or (in some unusual cases) planar.

We then isolate a few of the most promising panel designs based on criteria such as the desired aesthetic, ease of folding, numbers of contact points required (never more than the number of robots we own!), panel size and nesting during transportation, desired overlap (if it is external cladding), and so on. These selected designs are then flattened and scanned into a computer, and redrawn as a vector-based template. At this point we have to make some educated guesses about where the rulings sit on each piece of the surface, and draw these on the surface.

Finding the rulings is straightforward for some folds, but in others the surfaces might blend from one developable type to another (e.g. the rulings in one section might run to a point, suggesting that the surface is a conic, before becoming parallel as the surface becomes cylindrical). At the moment RoboFold are working on several processes to make this analysis easier.

Once the final flat pattern is refined, we send it to a lasercutter or cnc router and produce the template for the object in sheet metal. Each of the mountain and valley fold lines is either subtly scored along, or we use a dashed ‘perforated’ cut along the fold lines. The depth of the cut, or the use of perforations, depends on the particular fold we want to achieve.

At the same time, we import the pattern file into Rhino and Grasshopper, and use the Kangaroo Plugin to digitally simulate the material characteristics of the sheet metal we will use for the final object. We treat each edge and ruling in the pattern as a rigid spring and give them an identical start and rest length, meaning during the Kangaroo physics simulation they will act like a network of rigid wires. In this way the simulation can approximate a non-stretchy material (i.e. like sheet metal or paper, rather than say rubber). However each face must also stay planar – this is not a problem with the triangular faces in the pattern, but for the quad faces we must also extract diagonals and add these to the network of springs. After this we select certain ‘hinge’ points in the pattern, and define what angle we want them to fold to. Because the patterns have only a single degree of freedom, as one crease is folded all others should fold simultaneously.

Finally, we run the fold simulation and record the positional (X,Y,Z) and normal data for certain points on the surface that we want the robot arms to ‘grasp’ during the fold. Through an inverse kinematics process this positional information is then used to locate the robotic manufacturing arms during production. Other details, such as when to turn on and off the vacuum effectors at the end of each arm, are added after the simulation has been run and ‘recorded’.

The entire process is quite an iterative one, so that sometimes a pattern is simulated in Kangaroo and as a result we go back to the original pattern and adjust it. Similarly we often fold one of the full-scale metal templates by hand before sending it to the robots. This gives the designer a feel for how the material is behaving during the process, and it might tell us that the robot arms need to be repositioned on the surface, or that the score lines need to be deeper.

Personally, I really value the process for being fundamentally driven by the material constraints of the material – the metals – used. This seems to be something rather rare in design at the moment, when everyone is producing textureless 3D printed models.

Below is one of the first simulations we carried out on curved folding in sheet material, using Kangaroo and Lobster IK. These processes are applied to a table prototype that RoboFold developed.

The finished 1:2 scale card mock-up of the table was exhibited at the ‘DesignLondon’ talks at the RCA, May 2011.

A collaboration between Andrew Saunders and Greg Epps (RoboFold), this project was presented at the Rob|Arch 2016 conference.

I produced Rhino+GH facade simulation and fabrication tools for this workshop, run by Greg Epps and Florent Michelle.

These tools enabled us to simulate the curved folding of multiple unique panels simultaneously. Each panel’s form was defined by global variables (panel width and length ranges, desired fold angles, etc) and also local variables (proximity to attractor points that created small-scale directionality and greater control of the overall effect).